On Saturday night I went to our local bar and watched my first American Football match. And what a match. The New Orleans Saints were playing the Philidelphia Eagles.

As way of background, the Saints have been one of those teams that could only be loved by local fans. One of those teams you root for but know only a miracle can help them. For 40 years they have been nicknamed the "aints" because of their love for failure.

There is another explanation for this addiction to failure and this being New Orleans it is not surprising that it is steeped in voodoo and superstition. The local folklore goes that the superdome (where the saints play) has been cursed. Marie Leveau, the voodoo "queen", from the 19th century is "offically" buried in St Louis cemetry No. 1 but the folklore tale has it that she was really buried in the cemetry that lies beneath the superdome (it was built on a cemetry). So Marie being the voodoo high priestess is not so happy about a bunch of 300lb men running about on her burial plot and therfore she cursed the team and the superdome. This is why so many New Orleans residents did not go to the superdome during Katrina - they were concerned about what Marie might do to them (the subsequent horrors that went on in there the folklorists took as proof of Marie's continuing power).

But this is a new season and the Saints are winning and have discarded their old nickname. So the new local folklore theory is that because of what happened during Katrina, Marie Leveau has decided to lift her curse.

There is also another interesting Football oddity in this town. It is "Who Dat". When the Saints score or win the fans all chant "Who dat, who dat dem gonna beat dem saints". This town right now is going "Who Dat" crazy.

So on Saturday I learnt a bit about the rules and could follow the game (thanks to one of my friends) and chanted along with the who dat fans. It was a very exciting game with the Saints up 6-0 then the Eagles 13-6 and so it continued until finally with Marie's backing, the Saints WON!! Our local diner now has a sign in the window proclaiming "We now sell Eagle eggs"!!!

They are now one game away from the superbowl and fans in New Orleans are rubbing their eyes in disbelief and cannot quite believe this is really happening. But if there is one city in this country that deserves this excitement it is New Orleans. So I hope everyone in the world will unite around the Saints on Sunday at 2pm central time and help them battle the Chicago Bears because for New Orleans it is least the world can do.
Posted by Cursed Tea at 10:17 AM No comments:

Today is my birthday. And I am spending it with a hangover!! We had a great night last night on Frenchman Street in the French Quarter. I had too many vodka and oranges to the point of falling of a stool - not quickly but in one of those slow motion drunk backwards stumbling ways. (I got some ribbing about that today ...)

The point of going to Frenchman was to hear a great band that plays at "The Spotted Cat" (see photo) on Sunday night, called "Big Soul". They consist of drummer, electric guitar, electric bass, saxophone and lap steel guitar. They are fantastic and if you can you should check them out at 6.30pm on Sundays. The lap steel guitarist is amazing - I don't know how he does what he does but wow. His name is Dave Easley and you can visit his website here. Their bass player is also a member of the Louisiana Philharmonic Orchestra and his name is Dave Anderson and his nickname is "symphony boy". I found a cool link to a gig the two of them did at the kennedy center in Washington DC - you can watch and hear the gig online here.

If you get a chance to go to the "Apple Barrell" on Saturdays nights you can hear Dave Easley playing with another amazing N'awlins musician, Coco. He also has a webpage and its worth going to his bio and listening to the sound clip of him talking about how he found his guitar and his weird tuning that he uses. You can check that out here.
Posted by Cursed Tea at 1:04 PM 1 comment:

It has been way too long since I wrote anything on my blog. I can't believe that I didn't post an entry in December!!!

So an update is in order. And this is quite the update. At Thanksgiving Dazza quit his job - gulp - and gave his four weeks notice. So I drove back to Miami on the 22nd of December and on Christmas Eve we loaded both cars and drove to New Orleans leaving Miami to the plastic barbie dolls, freekie ugly transvestites and the Cubans.

So Dazza is all moved in and is going back to working in the arts (although has got a menial job to contribute some dosh in the meantime). He is happy for the first time in years (and so concurrently also is full of smart ass comments!!). We finally feel like we love where we live and have a life!! The fact that there is a pub just down the road (stumbling distance) with a wide aray of fine beers on tap also is plus - very much so for Dazza!! 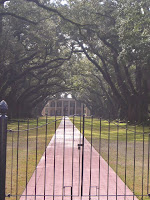 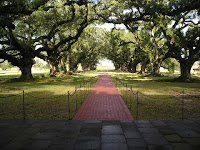 In the meantime my Mum came to stay before Christmas and we visited a plantation (see above) and went on a tour of very very fancy and beautiful homes in the Garden District.


We heard a great jazz group in the French Quarter one Sunday morning - "Doreen's Jazz". They were incredible and Mum bought some of their CDs for Christmas presents. 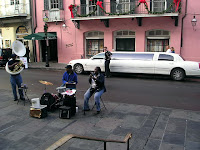 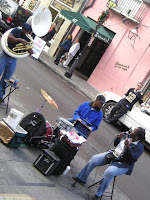 Dazza came up for a day when she was here and she made Christmas dinner - a week early - and we opened all our British presents. Just like home without the Queens speech. 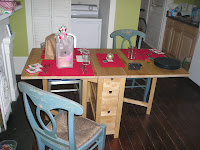 I was inspired to finally get out my acrylics and get painting and creating. When I figure out how to take decent photos of my work I'll post some examples.

I feel 2007 holds far more promise than previous years have and the most exciting part being able to enjoy our life!
Posted by Cursed Tea at 6:25 AM 1 comment: 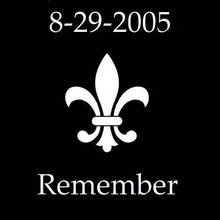 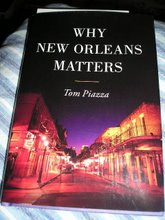